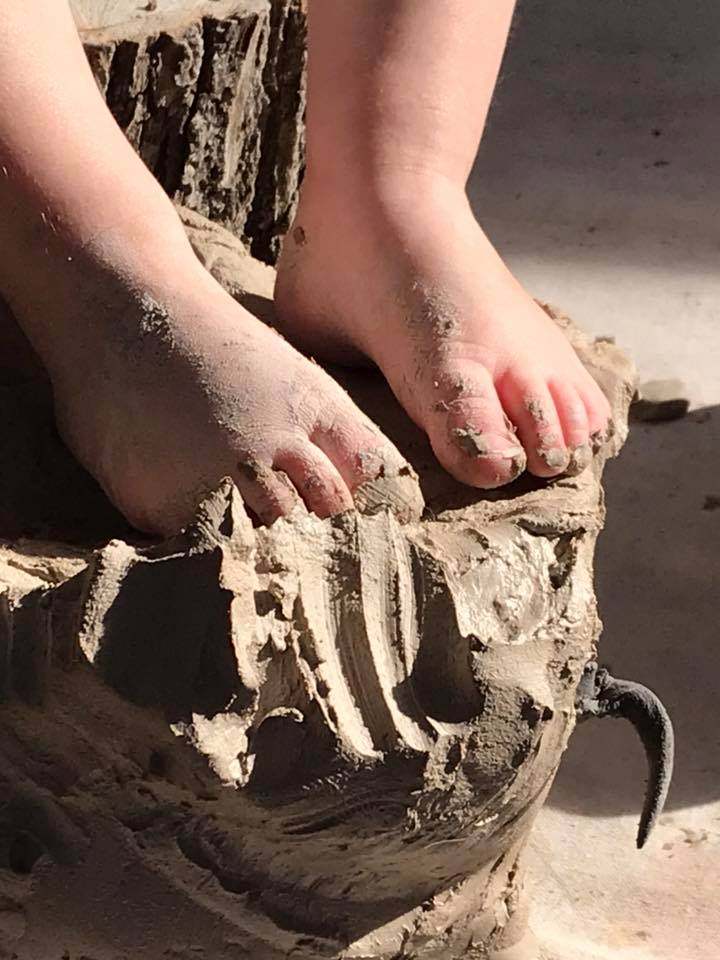 I perceive the materials of the world, including the artistic ones, as owning built-in emotional and spiritual qualities. Each material encompasses an inner non-verbal language.

Feeling and acknowledging the things we hold within our hands, their history and associations are a bodily instinctive nonverbal communication language.

In this post, I would like to relate to the most ancient matter living in our studios combined of earth and water- CLAY.

Here is a citation from The Spirit of Matter pdf concerning clay followed by a toddler examining clay in his palms.

Clay offers many artistic and therapeutic possibilities. It is perhaps the most wide-ranging medium in the art therapy field, unlocking an entire world. The combination of clay, water and the human hands create a birth-like transformation and a sacred beginning – an independent, flexible dialogue between matter and creator. …. The art of kneading and modeling requires concentration, meditation, unification with nature, tranquility and inner harmony. The artist’s hands touching the clay offer him an encounter with different degrees of heat, textures, dryness, moisture and stickiness.

Clay has its own life and breath; the creator’s hands, as they delve into the soft clay, convey basic and primordial emotions and sensations. The range of activities afforded by a chunk of clay mirrors the range of emotions that surface when working with it. It can be intensely and furiously mashed, monotonously and vigorously kneaded, deeply and painfully stabbed, gently and decoratively perforated. It can be rounded into soft, flowing forms, banged on forcefully, shaped and dismantled with curiosity and amusement, caressed and contemplatively smoothed with water. It can be added to endlessly or aggressively thrown and shattered.

Clay conveys various and even opposing emotions. Playfulness and anxiety, disgust and creativity, rejection and tenderness, amusement and anger, sexuality and destructiveness, joy and guilt, aggression and cradling, lack of control and organization – are only some examples. They may each appear separately or in any combination. Despite its remarkable flexibility, clay has its own life and limits which, if not respected, will prevent the sculpture from thriving. If the walls are not thick enough, it will not support height. A sculpture not properly joined will not withstand the firing process and crack. Clay has a deep and basic presence – a flexible and multifaceted personality – but it also has limits. Kneading represents a direct dialogue between the person and the matter, and as such images, symbols and metaphors arise.

The rhythmic organized activity helps the creator select a form. The soft primordial matter turns slowly into a figure, an image, a statement, an icon. A transition from nature to culture occurs – a transition from a state of chaotic matter to a meaningful substance full of associations and memories. Modeling is organization. The image and the techniques clarify what is important and what is not. The artist’s hands, knowing what they need to do from some deep and obscure underground source, strive to achieve their goal through ongoing handling and pressure imposed upon the clay.

Molding a clay sculpture reflects the artist’s internal dialogue on the one hand and his ability to control the medium on the other. This process is also indicative of his ability to flow with the matter and the surprises it brings through contemplation and winding paths. The wonder of creating is reflected in the final product. After forming the image and observing it from all sides, a phase of separate, remote viewing begins. The creator decides that the sculpture is complete and it begins its independent life. It dries slowly, turns lighter in color and shrinks slightly. The client looks at it again and again. He can still return this piece of matter to its original state by kneading it with water and starting all over, but once the sculpture is kilned its form is final. This moment is the beginning of the sculpture’s final independent life. The creator cannot change it anymore;

Orbach Nona & Galkin Lilach. The Spirit of Matter – A Database Handbook for Therapists, Artists and Educators Get it here.

Today’s #clay #exploration in the #outdoorstudio. We invited #children to #create new relationships with the medium. As they were using their hands and feet to #explorer, they #discovered how clay works and how to use their hands as tools. #the_claytray

The short video, and image above were taken By Talula Soffer in her The Clay Tray studio.