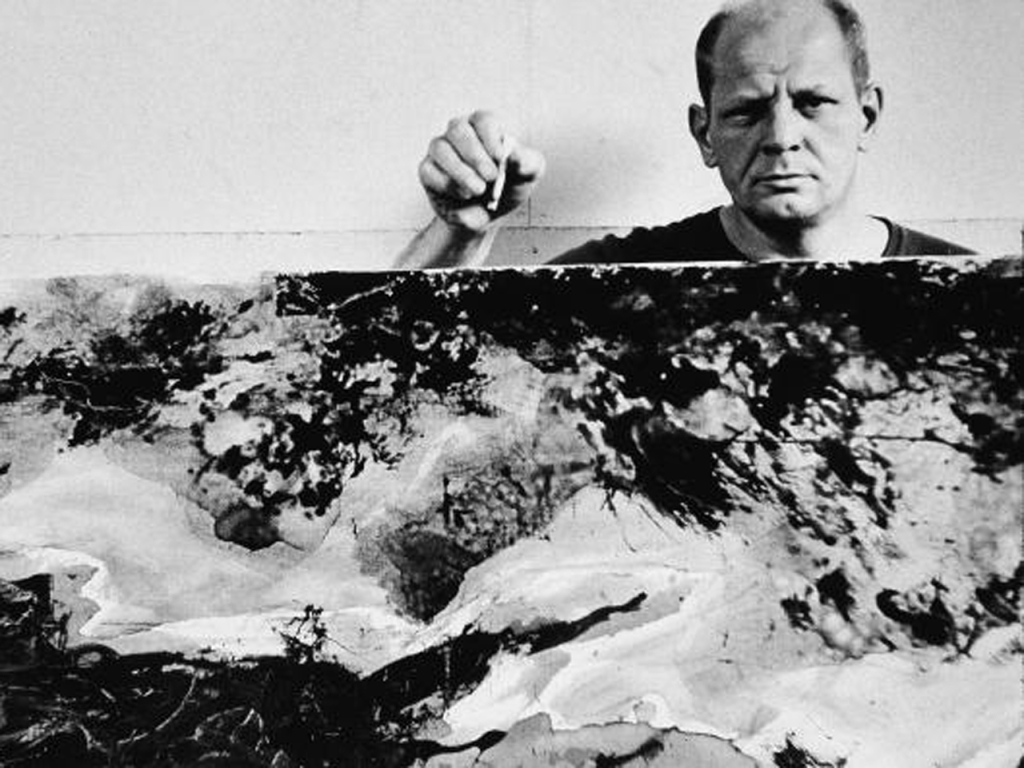 The following is a text from my book The Good Enough Studio, that demonstrates aspects of seeing the spiritual blueprint of an accomplished artist in action, quite literally, as we see Jackson Pollock in the act of painting.

In the early 1950s Jackson Pollock conceded to filming a documentary about his work at the studio, by photographer Hans Namuth. The film chronicles two artworks: a huge canvas painting poised on the floor, and a second painting on an elevated sheet of glass. Niemouth filmed the creation of the second piece from underneath the glass, while Pollock’s voice narrated the description of his work:

“My art is direct. I usually paint on the floor. I enjoy working on a large canvas. I’m more at ease and uninhibited when working with an expansive surface. With the canvas on the floor, I feel closer to the painting, as though I were a part of it.
I want to express my feelings, not illustrate them.” 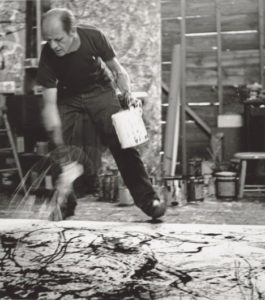 By observing Pollock’s body language, the following movements are noted: he moves swiftly, sometimes crossing his legs around the four corners of the large canvas. He spews paint, alternating between brushes, sticks and syringes, across the entire surface. He seems to hurl the paint evenly. His movement seems like an internal, repetitive rhythm. He looks extremely focused on his work, rarely lingering over any particular section. At times he kneels, leaning on one knee. He bends over, straightens back up, rising and crouching at regular intervals (like a choreographed plan). He uses his whole body with large, swift, and determined motions. Within this extensive movement, he produces delicate, intricate motions from his wrists. Clearly, his hand movements are enabled by the strong, steady, and flexible positioning of his legs. He holds a canister in his left hand and a brush or stick in his right, alternating between them once in a while. He dabs, sprays, hurls, pours, and trickles. The movement of his hands and wrists are well-rounded and skillful. He seems to know exactly what kind of mark each movement will produce. He doesn’t hesitate to get covered in paint or to step in it.

The whole process is seemingly random, but with closer observation a meticulous choreography emerges, where the body moves in space and time, with precision refinement and grace. There is great strength in his legs that support all that bending and rising, hurling paint from varying heights to produce the different effects on canvas. This rich process yields an internally ordered colorful painting that is lucid and clean. It has an internal abstract rhythm and ornamentation. 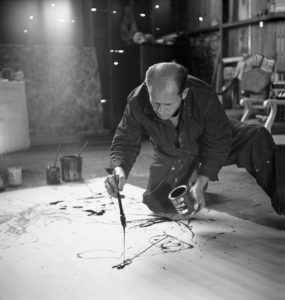 The result of this dance-painting-sketching is that Pollock’s work encompasses both space and sound: there’s a sense that this twodimensional creation captures the entire space around it, vibrating. I have comfortably gazed at his large artworks from a distance of 3 meters, feeling that if I got any closer, I would invade the physical boundaries of the painting itself. And indeed, when I approached to inspect the textures from up close, I felt as though I was drowning. From up close I could literally hear the hurling of the paint, sometimes light and delicate and sometimes thicker and denser, with a wider
sound.

How does all this relate to the “unthought known” and the “roots”? This is an artist who is highly aware of his need to move while he works, to create within an expansive area, to use liquefied colors, to produce authentic expression, as he puts it: “My painting is direct. I want to express my feelings, not illustrate them.” From the perspective of an art therapist, I gather that a person who chooses to work in that way is conveying a strong need for bodily movement, rhythm, style. Spraying and hurling often reflects anger, frustration and a need for emotional release, which ultimately leads to a calming quiet after the storm. I also note that the intensive motions compelled by the hurling of liquefied paint, necessitate a solid grounding and a steady posture. Perhaps this is the only way he feels safe, since he essentially requiresthe largest possible “canvas”—the ground itself.

I sense that he not only wishes to express his feelings, but also wants to live them fully over and over again, through his artwork. Pollock essentially recreates the act of transformation. I don’t know how Pollock would articulate it, but in Bollas’ terms, he construes situations that reenact the aesthetic experience—the experience of the “unthought known.” I would hypothesize that his biography is interwoven with his art—strewn with physical, expansive bodily experience that left a deep mark and longing in him. His creative processes are comprised of personal rituals with which he recreates transformational moments, coming face to face with his emotional roots. 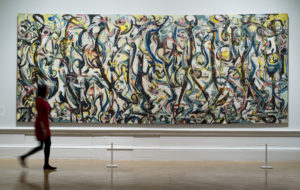 Jackson Pollock was the fifth son of a hard-working family, which migrated from ranch to ranch for its livelihood. His father was a map sketcher, and Pollock used to accompany him on his jobs from time to time. On one occasion he joined his father for the mapping of the Grand Canyon. Subsequently, during his art studies, he traveled with a friend across the United States and was deeply impressed by Native American sand-drawings and complementary rituals. As an art therapist I gather that his theory and method of work is profoundly influenced by the impressions and experiences he accrued throughout his childhood and adult life. Beyond his theory that a modern artist always finds new ways of expressing new things (like space travel or the atom bomb), there is also a young boy who intimately traveled with his father, across expansive, breathtaking regions. That is, essentially, the original “blueprint” of his creations.

It is therefore no surprise that Pollock doesn’t paint on diminutive canvases. His sizeable surfaces are a personal expression rooted in the early periods of his life. His movements and gestures are not unlike a ritual dance around a Totem pole in a wide-open plain, something of a primordial ceremony of worship that all ancient cultures espouse; like a continuous search for answers to ponderings, for peace, for meaning, for paternity—for spirituality.

Pollock is considered a rebel artist, who discards the Western format in favor of Eastern methodology. He uses the paintbrush like
a stick. Applying his own social-artistic approach, he explores the very ends of continuums—sometimes at a high emotional cost.

He has rebelled against the paternal-artistic imagery of Western art, taking a risk in trying to expand the consensual boundaries. Besides defying paternal imagery and creating a new internal Totem, Pollock also searched for ways to organically integrate expanses, movement, rhythm, chaos and order—all in one. As I see it, Pollock’s work stems from his deepest personal roots. With his use of materials, he manages to formulate profoundly sweeping statements that encapsulate the existential experience of many human beings in the twentieth century. His intimate exploration of his own internal chaos resonates deeply and closely with many others’ internal processes. Perhaps that is what distinguishes him as an exceptionally great artist. 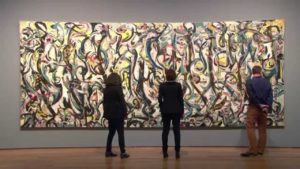 Author: orbachnona
Filed Under: bluprint, choice, spiritual blueprint, The language of materials, Uncategorized, what is a studio?
Tags: choice, joy, permission, playfulness, pleasure, power, sensuality
How much talking is needed by the art teacher?
How does one create organic bridges between art and therapy?